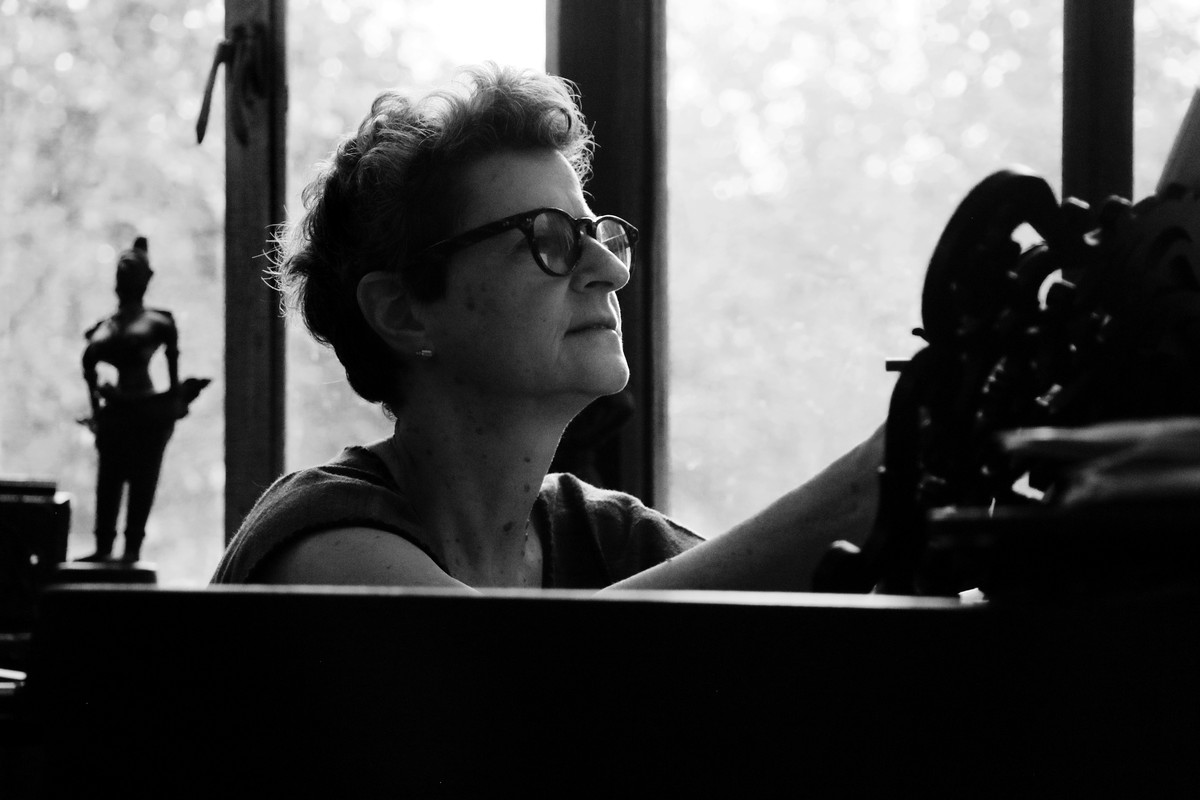 Eleonor Sandresky is a composer, inventor of the Wonder Suit, producer of film with live orchestra concerts, founder of the MATA Festival, and pianist with the Philip Glass Ensemble since 1991.

Eleonor’s music is heard around the world, including at Cannes Film Festival, Venice Biennale, Budapest Opera House, and most frequently in her hometown of New York. She has received numerous grants and commissions from notable institutions like ASCAP, Jerome Foundation, New Music USA, Meet the Composer, American Music Center, and has been a composer-in-residence at Yaddo, STEIM (Studio for Electronic Instrumental Music) in Amsterdam, and the MacDowell Colony.

Recent works include Strange Energies, a set of etudes for solo piano (2019); Wunderkammern Live! (2017) for mixed ensemble and film by Erika Suderburg which premiered on Tribeca New Music; Opening (2016) for guitar ensemble, commissioned by The NY Classical Guitar Society; and, Donne Songs Without Words (2015), for choreographed viols and baroque harp, commissioned by Parthenia with a grant from NYSCA. Other notable premieres have included Suite for String Quartet (2007) by ETHEL, Meditation for String Orchestra (2004), recorded by the Kiev Philharmonic and released on ERM in 2006, and The Fall of America (2003), premiered by Vox Vocal Ensemble. Works-in-progress include a new chamber piece for Collide-O-Scope to be premiered in the Spring of 2021.

Working at the forefront of avant-garde concert-as-theater, Eleonor reinvented herself in 1999 as the original Choreographic Pianist with her groundbreaking composition, A Sleeper’s Notebook (1999–2003), in which she explores her deep interest in how motion translates to emotion through sound. Out of this work, Eleonor invented The Wonder Suit, a remote set of wireless sensors worn and used to trigger sonic events through movement during live performance. These sonic events range from discrete processes to surface manipulations of pitch and build on the concepts and ideas in her choreographed works. She has created large-scale works for The Suit, including A Space Odyssey (2016) which incorporates found sounds from NASA as a basis for the composition. Eleonor continues to don The Suit in improvised, live performance. In recent years she has also been a featured composer/performer at London's Cafe Oto, Morelia Center for Electronic Music in Mexico, San Francisco Center for New Music, USC Fullerton New Music Festival, and Gallery MC in Manhattan.

Eleonor has always been interested in creating opportunities for others. To that end, in 1996 she co-founded Music at the Anthology, Inc, more commonly known as the MATA Festival. MATA’s mission is to commission and premiere works by young composers in a setting of their peers from around the world. She is also a founding member of Ensemble 50, a composer-driven improvisational group, and The Gathering, a flexible chamber ensemble dedicated to contemporary music. Eleonor created and curated a concert series, Rétes (RAY-tesh), where she collaborated with a different composer/performer for each concert covering a broad spectrum of musical styles and including Kamala Sankaram (Thumbprint Opera), Pat Irwin (Raybeats/B52s), Randy Gibson (The Four Pillars), and Du Yun (Angel's Bone).

As music director, Eleonor has worked in a variety of theatrical settings — from dance performances with Susan Marshall & Company to film-with-live-music projects. Deeply involved in the genre of live music and film, Eleonor composes, conducts and produces concerts of her own scores, as well as those of Leonard Bernstein and Philip Glass throughout the world, from Beijing Music Festival to Tanglewood Summer Festival. As pianist, she performs her own works and has premiered, performed, and recorded works by Egberto Gismonti, Eve Beglarian, Guy Klusevcek, among others with ensembles including Essential Music and the Vanguard Chamber Orchestra.