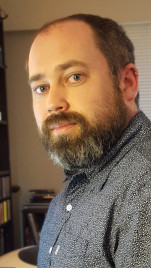 Christopher Reiche Boucher is a performer and composer in Victoria BC known for his enthusiasm for performing and composing for unusual instruments and performance situations. His compositions have been performed by Cathy Fern Lewis and Marina Hasselberg, the Emily Carr String Quartet, Negative Zed Ensemble, Pembroke Symphony Orchestra, ContaQt, and Quatuor Bozzini. In June 2017, he completed a solo 24 hour performance of Erik Satie’s Vexations in Prince George at the Casse-Tête Festival of Experimental Music. This marked his third solo performance of this work.

Reiche Boucher performs in Victoria at A Place to Listen and on concerts hosted by the Victoria Composers Collective. Before becoming Librarian for the Victoria Symphony, he helped establish the Canadian Music Centre’s Victoria Creative Hub and programmed concerts as the New Music Coordinator for Open Space Arts Society. He served as President of the Canadian League of Composers from 2016 to 2020.