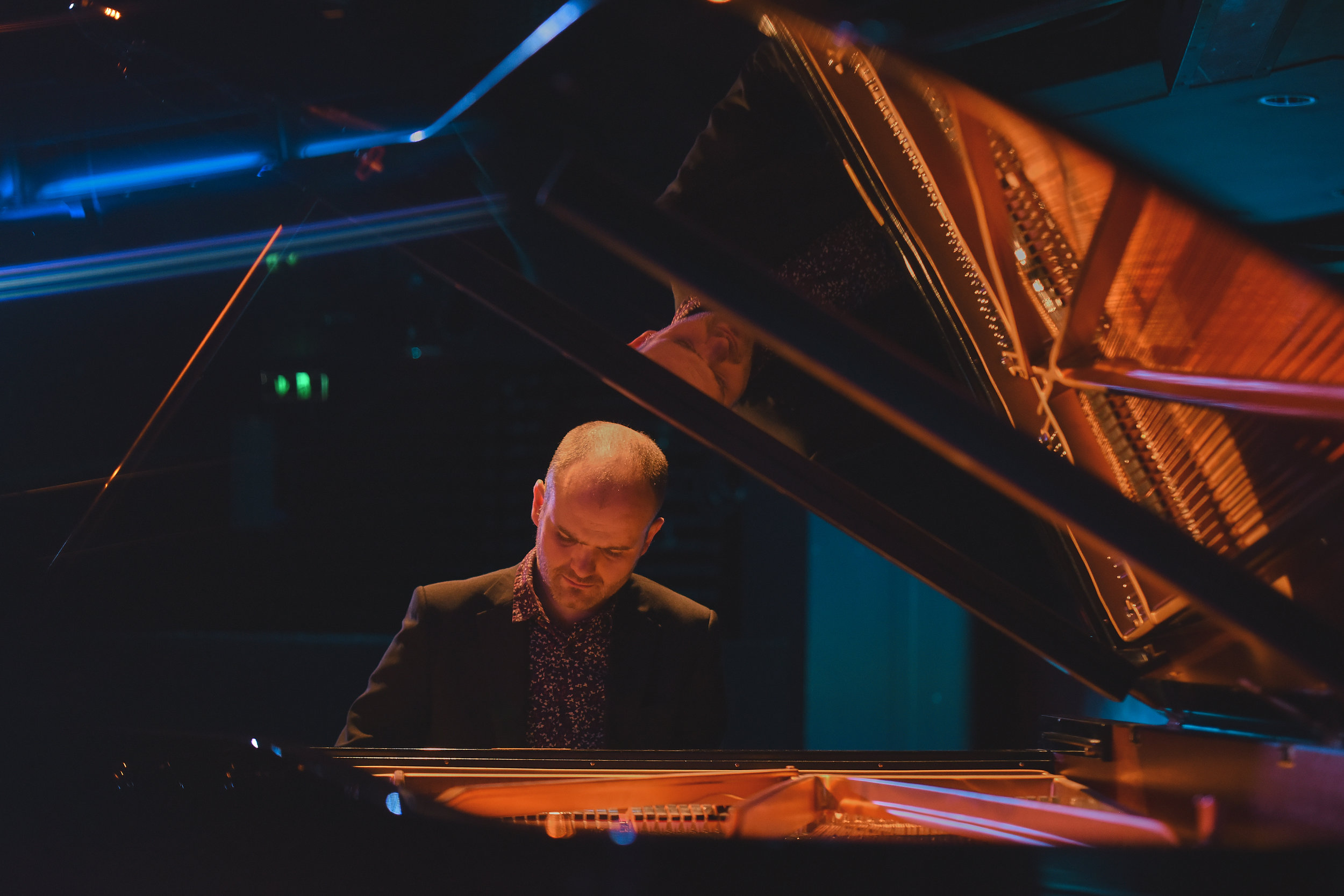 Described as ‘a brilliant young pianist’ (Alyn Shipton, The Guardian) Paul Edis is a performer, composer, educator and promoter based in London.

From an early age Paul was composing and performing regularly, forming his own bands and promoting concerts. He received a scholarship to study composition at the London College of Music in 2003. Whilst at LCM, initially with the aim of training to become a composer of film music, Paul quickly became a regular visitor to the Jazz department arranging charts for the LCM Big Band, taking part in workshops, and he soon began performing regularly in London alongside saxophonist Vasilis Xenopoulos.

He moved back to the North East in 2006 after completing his degree and began studying for an MA and then PhD in Composition at the University of York. At the same time, he began to work regularly in the area, performing with the Voice of the North Jazz Orchestra and backing touring soloists (including John Faddis, Julien Siegel, Alan Barnes, Tony Kofi amongst others). He established a regular jazz night at the Side Café in Newcastle (which later inspired the regular Splinter at the Bridge sessions) and formed his own trio and then sextet.

In 2009 Paul was chosen as one of the finalists of the NCEM/BBC Radio 3 Young Composers’ Award. His composition Redemption for choir was performed by the Ebor Singers. Whilst studying for his MA and PhD Paul wrote music for choir, choir and organ, orchestra, string orchestra, brass ensemble, for two pianos and a series of solo studies. His work Serial Variations was selected to be performed by the Chimera Ensemble as part of a European Tour in 2010. In 2011 his composition Four Scenes Unseen was premiered by University of York Sinfonia under the baton of Dr. John Stringer.

His sextet released their debut album There Will Be Time in 2012 to critical acclaim. He has since released two solo albums and a second Sextet CD, Mr Hipster with artwork by Alastair Graham. Reviewing Paul’s 2015 solo CD Just Like Me critic Brian Morton described Paul as ‘a significant new voice in British Jazz’. His duo CD A Narrow Escape with saxophonist Vasilis Xenopoulos was released in 2017. His music has been performed on the radio in the UK, in Europe and in the US.

In 2016 Ushaw College commissioned Paul to compose a 45-minute work to celebrate the feast of St. Cuthbert. This new work comprised elements of jazz, folk and contemporary classical music. The Ushaw Ensemble who gave the premiere of this new work were chosen by JazzNorth to be one of the Northern Line ambassadors in 2017/18 and have toured the North. The recording of the St. Cuthbert Suite will be released on April 4th 2019.

In 2018 Paul was commissioned by Darlington Jazz Festival to write a suite of new music for Vocal Collective, the Paul Edis Trio and guest soloist Alan Barnes.

In the August of 2018 as part of the Great Exhibition of the North, Paul was commissioned to write a new work for the Gala Big Band inspired by Turner Prize winning artist Lubaina Himid’s exhibition Our Kisses Are Petals.

In 2019, Paul has been given the title of Associate Artist for Sage Gateshead. He has been commissioned to write a new work for a collaboration between leading youth ensembles Young Sinfonia and Jambone. Thoughts, Words and Deeds is to be premiered on July 13th under the baton of fellow Associate Artist, Karin Hendrickson.

Working in music education, Paul has been course leader for the BMus Jazz Popular and Commercial Music degree at Sage, Gateshead, he has given lectures and taught for Newcastle, Durham and York universities and he regularly gives workshops, talks and masterclasses for musicians of all ages. He works extensively in youth jazz education and was asked to be jazz piano tutor for the prestigious National Youth Jazz Collective summer school in 2018.

Paul also promotes successful jazz concert series in Durham and Newcastle, and has been director of the Ushaw Jazz Festival since 2016.