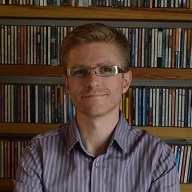 Ed Puddick graduated from the Royal Birmingham Conservatoire in 2004 having studied with Mike Gibbs and Hans Koller. Now a busy freelance composer/arranger, Ed has returned to Birmingham to teach composition to students on the jazz programme.

Ed’s reputation as a composer/arranger was established through his writing for the Ed Puddick Big Band, a 14-piece ensemble for which Ed has written a huge number of works, including ‘Guys & Dolls’ (Diving Duck Recordings, 2010), ‘Jubilee Suite’ (2012) & ‘Only Thelnious’ (2017).

In 2018 Ed won the Arranging Prize in the International Composition Competition at the Barga International Jazz Festival, where his winning arrangement of Dizzy Gillespie’s ‘Con Alma’ was performed by US trumpeter Jeremy Pelt.