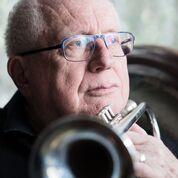 Henry Lowther was born in Leicester, England, in 1941. As a child Henry learned cornet from his father and took private violin lessons before going on to study with Manoug Parakian at the Royal Academy of Music.
His first interest in playing jazz was sparked by hearing a recording of Sonny Rollins. He then resumed brass playing on trumpet.
In the sixties Henry was one of the first musicians on the British jazz scene to experiment with total free improvisation and also at this time began a musical relationship with Sir John Dankworth which lasted till the composer’s death in 2010. In 1967 he played on the now legendary Ken Wheeler album, “Windmill Tilter”.
In 1969 Henry appeared at the famous Woodstock festival with the Keef Hartley band.
Over the years Henry has worked in all areas of the British jazz scene and is one of only two or three trumpet players to have played lead trumpet for both Gil Evans and George Russell. He has also worked extensively as a studio and classical musician.
Currently Henry composes and plays in the London Jazz Orchestra, leads his own band Still Waters, and is a Fellow of the Royal Academy of Music.